Documenting your Node.js API with apiDoc

When you are developing an API and one or more developers (frontend, desktop, mobile, etc) will have to integrate their code with it, it’s very important to have it well documented so they know what and how they can use.

For that, in Node.js projects I’ve been using apiDoc, as it is able to generate documentation in HTML from annotations in the source code.

On my post about tests with mocha and code coverage with istanbul, I showed the example of the Task endpoints in our TODO List API:

This represents all our endpoints related to tasks in the system. How can we use them? What should the developers that will consume the API send to each of these endpoints?

So far there is no way for them to know other than looking at the code, which shouldn’t be needed.

Because of apiDoc, we can achieve that with annotations. The way I configure it, is by writing them before each endpoint configured in the files inside the routes directory. If you are not sure of what I’m talking about, check here when I mentioned how I configure and organize my Node.js projects.

With annotations, our Task endpoints (inside routes/tasks.ts) would look like this:

As you can see, we have the HTTP method type (post, put, get, delete), the endpoint address, the api version, the kind of permission it needs, the params it requires, the response and the error if the user is not authorized.

In the official website you can check the documentation and available params for the annotations.

Where is this UnauthorizedError coming from?

There are some settings that can be done for apiDoc and this UnauthorizedError is the one I usually implement.

Create a file called _apidoc.js inside the routes directory with the following content:

I also create another file, also inside the routes directory, called apidoc.json

These two files will be used by apiDoc when generating the documentation.

After writing annotations for every endpoint and configuring our project, we need to configure a task to generate the documentation.

The way I do that is using gulp. Install the required dependencies:

Then create a file called gulpfile.js in the project’s root directory. If it’s there already, just add the parts related to apiDoc to it:

You can change the “dest” there to another directory that suits you better. That’s where you want the output to be generated to.

Now all you need to do is to run:

After that, you just need to open the index.html file inside the directory you configured in the “dest” above and you’ll see something like this (Click on the image below to enlarge): 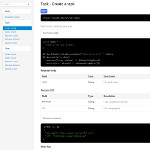 So the other developers can generate the same with gulp as well or you can even serve this generated directory via Nginx, for example.

In this post we saw how to document our APIs with annotations and generate the HTML for them using apiDoc.

Do you use another software for documenting your APIs or do you use apiDoc in a different way? Leave a comment below!