Tests and code coverage on Node.js using TypeScript with Mocha and Istanbul

In this post we’ll see how to configure the environment, write the tests, write the API endpoints and generate the code coverage report. The steps below will be based on the TODO List API I developed and is available here. For this post I assume you already have Node configured and MongoDB running on localhost.

Setting up our environment

Before we start, I recommend using Visual Studio Code, as it integrates really well with TypeScript and has amazing features, such as IntelliSense and debugging. 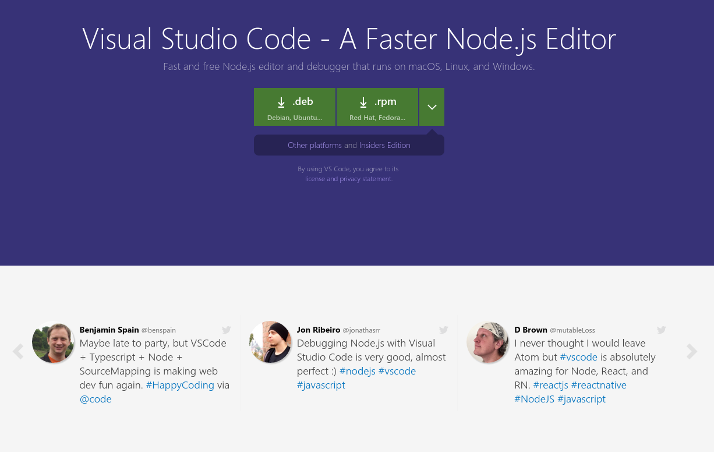 And of course, I’m on their official website for Node.js :)

I also recommend configuring the project by copying some files to its root directory, which will set how TypeScript and Istanbul will work.

I could paste them here but then the post would be even bigger for no reason, so you can just click on the links above and copy them.

We will need a test directory, where our test files will be created. Inside this directory called test, copy the content below to a file called mocha.opts

This is usually the directory structure I have when creating a Node.js project.

As you may notice after opening the gulpfile.js file, I keep there a task that transpiles the TypeScript code to JavaScript in a bin directory and generates sourcemaps to be used later by Istanbul when generating the code coverage. Because of these sourcemaps, Istanbul is able to map correctly the TypeScript files instead of the ugly JavaScript ones that are generated.

The process.yml file you see there contains the settings for pm2 to work when we deploy our server, but I’ll leave that for another post.

The .env file contains environment variables that can be accessed throughout the system, such as the timezone, some keys, etc. It is loaded by the dotenv npm package and accessed via process.env.API_BASE (for example, if you declared API_BASE inside the .env file).

Example of a dot env file:

Let’s start our project with npm:

For our build process to work, we need to install the required packages:

and for the dev dependencies:

Inside the package.json file used by npm, I usually leave “main” as “server.js” and set some values inside the “scripts” part:

Inside “start” it can be nodemon, pm2 or any other tool you use to run it for development. I recommend nodemon, as it is well suited for that. The way I deploy it, it doesn’t matter what command is written there.

This command inside “test” runs istanbul, which generates the coverage report using the tests that are run by mocha.

You can find an example of a package.json file I use here.

Create a file called gulpfile.js in the root of the project with the following content:

You will need to have a MongoDB instance up and running, so you can install it directly on your OS or use a Docker image. This part will not be covered by this post.

In this link you can find the .gitignore file I usually use for Node.js projects. It’s important to have it so when you push your code to a repository the node_modules directory and other files that should not be versioned don’t get sent there.

I usually create inside the test directory a common.ts file that is imported inside every test file. Each test file represents a controller and has a _test suffix. Inside this common.ts file, we declare the environment as test, import mocha, initialize supertest, etc.

Our TODO API will have tasks, which are items in our TODO list. We can write some tests for our tasks so we assure they work the way we need them to. Let’s create a file called tasks_test.ts inside the test directory and add some tests to it. I commented out the login and authentication parts of it, as this post is not about authentication and I plan to write about this subject later, but you can see now already how it could be implemented.

As you can notice, now we have some tests accesssing our API and the responses they expect to get for each call. We still have no routes configured for that, so nothing would work so far. Let’s get to it.

Before configuring the routes, we need to configure Express and the database. Inside the config directory I create files to configure express, the database, the cache when it’s being used, the logging tool, etc.

An express.ts file would contain the following code:

The process.env.DB_IP value is coming from what was declared in the .env file

As you could notice above in the express.ts file, the routes directory was required. When require is called like that, if there is an index file in the directory, that’s the file that gets required.

We can now create an index.ts file inside the routes directory with the following content:

There we require only the file with the routes for the tasks endpoints, but we could also require other files with other endpoints as well, as our system grows and we add more functionality.

The tasks.ts file inside the routes directory will have the following content:

It’s important here to use the correct HTTP methods. POST for creating, PUT for updating, GET for retrieving and DELETE for deleting data.

Documentation for these endpoints can be automatically generated by running the gulp task called apidoc that I have in this gulpfile.js example file. In order to generate this documentation, each endpoint will need to have commments using a specific format. You can find here the tasks.ts file with these comments if you want to generate this documentation. I simplified it for this post as we’re now focusing on tests instead.

Some notes about it:

Now we need to define a model for our tasks. Let’s create the file task.ts inside the models directory, as it was imported above in the tasks controller.

Running the tests and checking the code coverage

We are ready to run our tests and check how much of the code is covered by them.

Run the following command configured in the package.json file:

This will run gulp to transpile our TypeScript files to JavaScript (es6), generate the sourcemaps and then run Mocha with supertest, which in turn will access our endpoints and generate the test results. 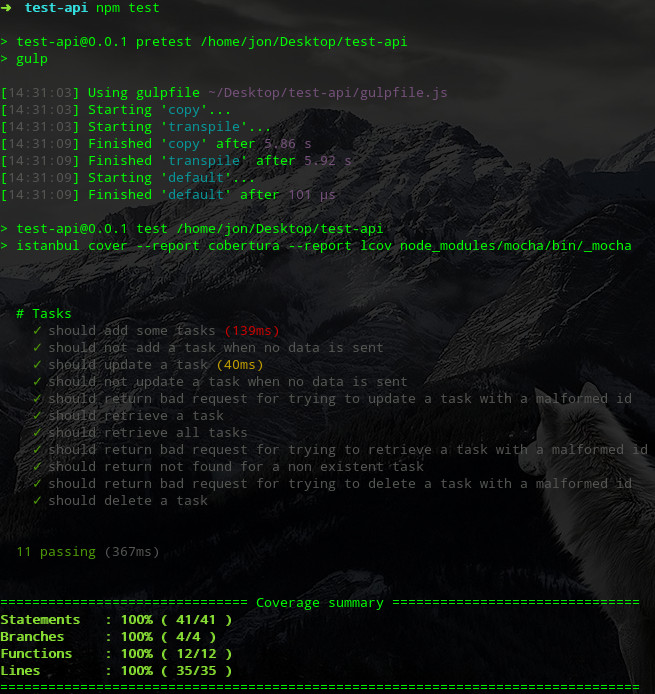 If all tests pass, the code coverage is generated by Istanbul and stored inside the coverage directory. Open the index.html file inside coverage/lcov-report to see it.

My next post will be about how to configure Visual Studio Code for debugging and transpiling TypeScript to JavaScript automatically.

In this post we saw how to configure an environment for Visual Studio Code with TypeScript for tests and how to generate code coverage using Istanbul for them. More tests and functionalities can be added later using this base.