The importance of the items and the order in which they are presented in this article, is that each of them is part of the final result which we wish to achieve. In the end you’ll see they all match together to make the development and release process work.

When thinking about a software release, it all starts with deciding how the versioning will be handled. I’ve been following Semantic Versioning (semver) in my projects for years now and recommend it.

Given a version number MAJOR.MINOR.PATCH, increment the:

Ps: There’s also a variation of it for purely frontend repositories.

A convention to use in all commits

In most projects, if the team wants to keep some kind of changelog, it’s necessary to write the latest changes somewhere manually (Confluence, Notion, a CHANGELOG.md file, Slack, etc). We want to automate that and remove the manual steps required in order to create a release, but we’ll get to this part on how to automate the changelog generation in a bit. There’s one step which is a requirement for us to get there:

The Conventional Commits specification provides a group of rules on how to format every commit message so that they all follow the same pattern across the project. It is used by the Angular team and many other big projects.

A commit contains the following structural elements, to communicate intent:

Additional types are not mandated by the Conventional Commits specification, and have no implicit effect in Semantic Versioning (unless they include a BREAKING CHANGE). A scope may be provided to a commit’s type, to provide additional contextual information and is contained within parenthesis, e.g., feat(parser): add ability to parse arrays.

Making sure that the Conventional Commit rules are followed

In order to enforce that the correct format is followed, the commitlint library can be automatically called via git hooks locally when the developer tries to create a new commit. It works as a linter, but for commit messages!

Then add a file called commitlint.config.js to the root of your project, with the following content:

Git hooks are scripts that run automatically before or after executing Git commands like Commit and Push. With Git hook scripts, users can customize Git’s internal behavior by automating specific actions at the level of programs and deployment, like for example validating that the commit is following the standards and not breaking the tests.

They can be managed with the use of a library called husky.

The hooks I usually configure are: pre-commit, commit-msg and pre-push

Install the husky library as a dev dependency:

Add the pre-commit hook that runs the linter:

Ps: My eslintrc example can be found here.

Then finally the pre-push hook that runs the tests:

After these steps, commit the .husky directory to the git repository.

For the automated changelog generation to work well, it’s important to have a well defined development process.

When a developer starts to work on a ticket, a new branch needs to be created in the git repository. This branch must be created out of the develop branch.

The name of this new branch that the developer will create can be anything. It doesn’t really matter in this case, as it must be automatically deleted after the PR is merged so that the repository doens’t become a mess of hundreds or thousands of branches. What I recommend, though, is to follow a similar format to what is done in the commits, so that it’s easy to identify what that branch is about.

For example, if it’s a new feature:

When the developer is ready to submit changes to the repository, a new Pull Request needs to be created. The Pull Request title matters more than the name of the branch, since that’s what will end up in our git history and, consequently in our automatically generated changelog! Hence, when creating a Pull Request, its name must follow the Conventional Commits specification.

An example of how the PRs following Conventional Commits would look like in the repository history: 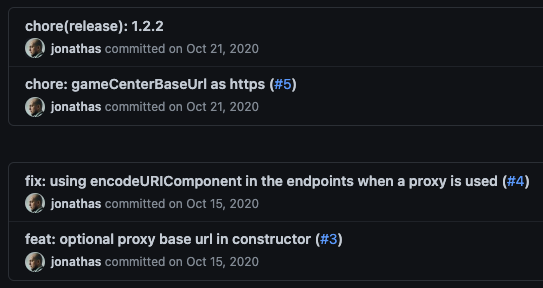 If you’d like to also link the PRs to Jira tickets, it’s recommended to add the Jira ticket to the PR title as well, following this format: <type>(scope): description [jiraticket-number]

Ps: You’ll need to, of course, configure this sync between Github and Jira separately. This part is not covered by this article.

Making sure the Pull Request title format is followed

Using Github Actions, it’s easy to implement a workflow that checks the Pull Request title and validates it against the Conventional Commits specification.

You can find the gist with the code here.

Save this code to the following path in your project: .github/workflows/lint-pr-title.yml

Whenever a PR is created, this workflow runs and doesn’t allow the PR to be merged if the title is incorrect.

Imagine dependabot creates 20 PRs and all of them run your Github Actions workflows. That would spend a lot of precious Github Actions minutes, which cost money! So as a bonus, this workflow doesn’t run on PRs created automatically by dependabot, which should already be following the Conventional Commits specification.

A good pull request should allow developers to review it quickly, so it needs to be small and well explained. The best way of thinking about it to keep it smaller is that it should cover one thing only, as in the Single Responsibility Principle (SRP). 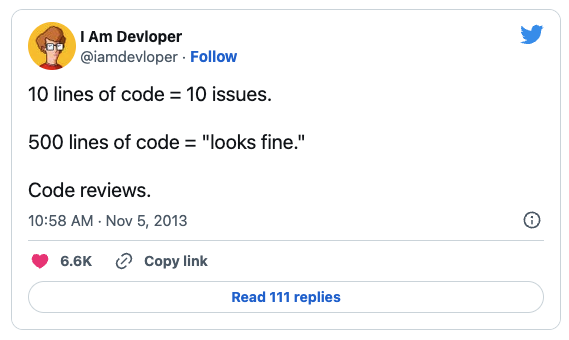 Here’s an interesting and worth reading article I found the other day that gets deeper into this topic: The anatomy of a perfect pull request

In order for the changelog generation process to work correctly, the git history needs to be clean, so there must be no merge commits in the develop nor in the master/main branches. The repository needs to be configured to only allow squash merging, so that only PRs end up in the git history. In Github that can be done in the following area:

And then the developers can configure git locally to always use rebase so that they won’t need to create merge commits when fixing conflicts in PRs. This can be done globally for all projects by running the following command:

Then when synching the changes from the develop branch to the branch they’re working on, they can just pull the latest changes from develop into their branch and the rebase will happen automatically:

Bear in mind that if you have dependabot enabled in your repository, it’s usually a good idea to change the validations above so that they don’t run on PRs created by dependabot. Otherwise you’ll see a big increase in Github Actions minutes. I won’t go deeper in details about them as it’s not the focus of this article.

From “What is a Staging Environment?”

The deployment to Staging should happen every time a PR or commit is merged to the develop branch. This can be done by configuring Github Actions, for example, to start and handle the deployment once that happens.

If there’s no well defined process yet for deployments to production, it’s always good to follow the golden rule of “no deployments on Fridays!”

Whenever we want to deploy to production, a release needs to be created.

A release branch can be created out of the develop branch, then a PR can be created so that after it’s approved it’s merged to the master/main branch.

Then after that, the release process can be started manually with the help of the release-it wizard or the Github Action can pick it up, run the release-it lib inside of it in automated mode and do what else needs to be done for deployment. We’ll talk more about this part below, so keep reading.

The release process should always be started on the master/main branch and then synched back to develop.

In case the release breaks production even after all the status checks and QA approval, we need to have a way to rollback what is deployed to production to a stable version. This can be done via a Github action workflow, which exists for this purpose and can be started manually.

From the repository, the developer should be able to select which branch this workflow should run from, so that this branch with the fix replaces what is in production. Or this workflow can instead always revert the master/main branch to the previous version. It’s a good idea to decide with your team how this process will be handled in your specific case.

Finally after all is configured in the repository and the team is following a well defined development process, it’s time to talk about creating the release!

This process is handled by the release-it library, which can be used in two ways:

When the release-it library starts, it:

Add the following to the “scripts” part of the package.json file to enable the npm run release command:

Create a .release-it.json file on the root of your project:

Ps: If your project is an npm library, you can also make release-it push it to npmjs.com automatically by changing npm.publish to true in the config above.

With the use of the release-it library, the changelog is generated automatically during the release process. Every item in git history from the last version until now is added to the beginning of the CHANGELOG.md file in the root of the project. It’s important that the previous steps mentioned in this article are followed so that the resulting changelog is well formatted. 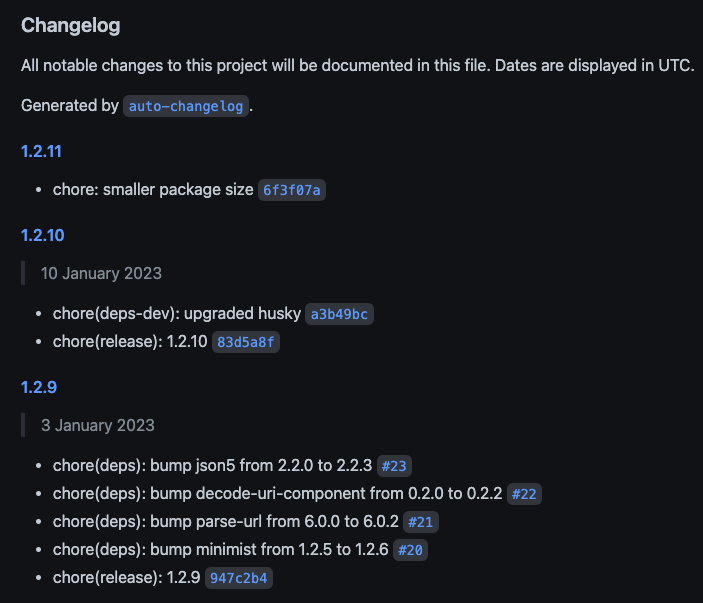 As the changelog file is in Markdown format, it also contains links to the specific PRs.

And that’s it, as the integration is already configured with release-it.

As an idea for further improvement, in case your company has a Slack channel where people need to post changelogs to, you can extend the idea presented in this article to post the automatically generated changelog to Slack.

The release-it library allows us to add a post release hook that could be integrated with that or it can be done via a job in the same Github Actions workflow.

By using the tools and processes presented in this article, development teams can improve the software release process and deliver high-quality software faster with efficiency, better accuracy and quality. Do you have any idea for improvement or have you been working differently? Let me know in the comments and let’s discuss so I can learn more from your experience as well!